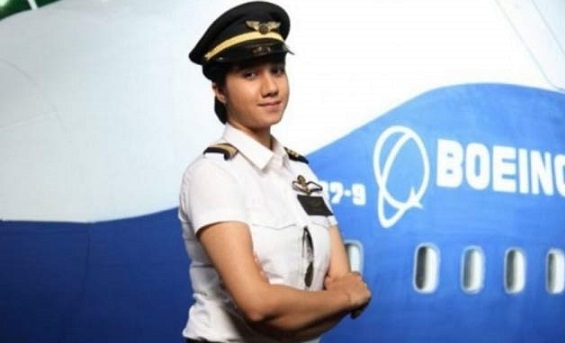 The time has gone when Indian females undertake only home tasks and then get married, or spend their entire life making the family of others.

In today’s world, women are equal to men in all fields, as Ayesha Aziz, a 25-year-old Jammu, and Kashmir citizen, has proven.

India pilot Ayesha Aziz has also achieved the title of being the youngest pilot, illuminating the name of the country.

Today, we’ll talk about this brave youngster “Ayesha Aziz” and how she rose to such prominence at a young age. Where did she begin her profession, and how many challenges would be overcome in obtaining this position?

In today’s article, we will discuss all the important things about Asha Aziz’s biography.

Who is Ayesha Aziz?

Ayesha Aziz, a 25-year-old Kashmiri pilot, is India’s youngest female pilot. In 2011, She made a splash with the rose title of “the youngest Indian Kashmiri pilot”. Ayesha has made her name bright all across India at teenage when the rest of the kids are playing adolescent dramas and aren’t serious about their careers at all. Ayesha Aziz of Kashmir has become the country’s youngest pilot.

In 2011, ten years prior she set a record for the youngest pilot girl and received a student pilot’s license.

Ayesha was trained to fly a MIG-29 at Russia’s Sokol airfield. She later graduated from the Bombay Flying Club (BFC) and acquired a commercial license in 2017. Ayesha had a strong desire to reach the heights of the sky since she was a youngster. Her passion expanded as she grew, and at the 5th standard, she decided that she wanted to be a pilot. When we are dedicated to achieving something, we cannot fail to attain it?

We need full hard work and dedication, commitment, and determination for that ambition or desire. When Ayesha’s family travels to native Kashmir, her brother was terrified of flying and would usually fall asleep, but Ayesha has always been attracted by the take-off and landing of an airplane.

In 2012, she completed a two-month space training course at NASA, where she met John McBride and her idol Sunita Williams. During her time in Alabama, Ayesha obtained advanced training at NASA’s Space Academy in space shuttle missions, microgravity, manned maneuvering unit, multi-axis training, and additional activity.

Ayesha was born in September 1995, in Mumbai, Maharashtra, and belongs to the Muslim religion. Abdul Aziz is her father and he is a businessman. Khalida Aziz, her mother, comes from the Jammu & Kashmir region of Baramulla. She also has a younger brother Areeb Lokhandwala, who is encouraged by her sister to achieve great things in her profession.

She serves as an inspiration and an example of women empowerment for many Kashmiri women. Ayesha told ANI that she thought Kashmiri women had made tremendous development in the recent few years and had performed remarkably well in the field of education.

Ayesha’s Challenging Role as a Pilot

During her interview, Usha stated that she was not interested in performing 9 to 5 jobs from the beginning. She desired a profession that would allow her to gain independence over time. Since childhood, she has been compelled to accomplish something distinct from the rest of the women. She also demonstrated her argument by becoming India’s youngest female pilot.

According to Ayesha, being a pilot is a challenging task that demands enthusiasm and fearlessness. There are relatively few daring ladies who perform better at their jobs in teenage. By performing outstanding work in her sector, she demonstrates that females are not weaker than men and they have equal access to all professions.

I believe Kashmiri women are doing really well, particularly in education. Every other lady in Kashmir is pursuing her Master’s or Doctorate degree. The people of the Valley are doing incredibly well. – Ayesha Aziz

What was the motivation factor behind Ayesha’s Decision to Become a Pilot?

Since childhood, Ayesha has disliked doing 9 to 5 jobs like other people; she desired a hard profession that required her to face challenges on a daily basis. She enjoyed meeting new people and exploring new locations.

To satisfy her numerous ambitions, being a pilot seemed to be the ultimate ideal career. It’s difficult because this isn’t your regular 9-5 desk job. There is no set schedule, and I must always be prepared to encounter new areas, different sorts of weather, and new people. Ayesha further stated that being a pilot is not an easy task because when you fly an airplane, you have the responsibility of many lives that are entirely dependent on you.

In this occupation, one’s mental state must be very strong because you will be carrying 200 passengers, which is a huge responsibility.

Ayesha has versatile fashion statement She like to wear from traditional as well as western.

I’ve always found comfort in attires which cover me and I love how this dress defines me by being so simple, chic & yet so modest. In a time where being real is so unique, BE YOU..BE RARE – Ayesha Aziz