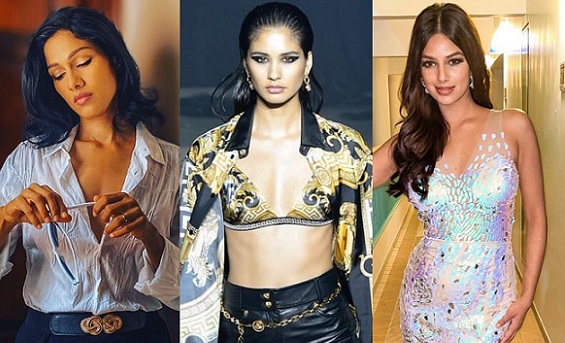 Modeling is a way of representing the work of well-known designers. Models play an important role in the fashion industry by showcasing high-end designer pieces. Those who are interested in fashion and modeling are eager to learn more about designers and fashion models. So, today we are presenting a list of the top ten best Indian models for 2022 (female).

Before going into detail about each model, let’s get started with a Quick List of top ten best Indian models for 2022 (female)

Prior to Harnaaz Sandhu, only two Indian celebrities had won the Miss Universe title; Sushmita Sen in 1994 and Lara Dutta in 2000. Harnaaz Kaur Sandhu was born on March 3, 2000, and belongs to Chandigarh, Punjab. She is an Indian model and actress, and she achieved the title “Miss Universe 2021”.

After 21 years, Harnaaz became India’s third beauty queen and is now the 70th Miss Universe 2021. Harnaaz is a 21-year-old Punjabi girl from Chandigarh who won the Miss Universe title.

Urvashi Rautela, born on February 25, 1994, is an Indian model and actress. She has appeared in many hit Bollywood movies. In 2015, she won the title of Miss Diva Universe and represented India in the Miss Universe contest.

Urvashi was born and raised in Haridwar, India, and Meera Rautela and Manwar Singh Rautela are her parents. She belongs to the Rajput family and made her first debut in 2013, “Singh Saab the Great”.

At the age of 15, Urvashi began her modeling career and appeared in Wills Lifestyle India Fashion Week. In 2009, she has also crowned “Miss Teen India”. As a teen model, she was a showstopper at Lakme Fashion Week and walked the famous runways at Amazon Fashion Week and Bombay Fashion Week.

Jasmeet Kaur Randhawa, also known as Jesse Randhawa, was born on August 11, 1975, in Jaipur, Rajasthan. Jesse is a successful model who has collaborated with famous designers. In 1994, she competed in the Femina Miss India pageant alongside Sushmita Sen and Aishwarya Rai.

Ujjwala Raut is an Indian super-model who was born on June 11, 1978, in Mumbai, Maharashtra, India. In 1996, at her teenage, she won the title of “Femina Look of the Year” at the Femina Miss India contest.

In 2002 and 2003, she got the opportunity to walk in the Victoria’s Secret Fashion Show twice.

Nethra Raghuraman is a famous Indian model and actress. In 1997, she achieved the position of the winner of Femina magazine’s “Look of the Year” contest. In 2000, she was also ranked “the best female newcomer” at the Star Screen Awards. Nethra was also the winner of the reality show Khatron Ke Khiladi Season 1.

Diandra Soares is a model, fashion designer, and television host from India. She is popularly known for her bald appearance on the runway. Diandra started her modeling career at the age of sixteen.

She was very serious and focused on her career when she was a youngster. In 1995, she has crowned Miss Bombay and due to that, she got a chance to collaborate with well-known brands such as Tilbury whiskey, Dinesh Suitings, VIP Lingeries, etc.

Erika Packard is the stunning daughter of famous Bollywood actor Gavin Packard. Gavin, who appeared in blockbuster movies such as Mohra, Karan-Arjun, and Sadak, etc.

Earlier, Erika planned to make a career in psychological science. But her mother encouraged her daughter to pursue a career in modeling. Now she is listed on the list of top Indian models.

Ashika Pratt is a fashion model who was raised and educated in New Zealand. In 2010, Ashika was famously known for her appearance in the Kingfisher Calendar and cover of Vogue Magazine.

She was born on April 26th, 1990, and raised in New Zealand. A pageant scout found her when she was 15 years old. Pratt competed in the Miss and Mr. Howick pageant, successfully completing as the second runner-up.

Amy Louise Jackson is a British model and actress popularly known for her appearances in Tamil, Hindi, and Telugu films. She was born in Douglas on January 31, 1992. She began her modeling career in the United Kingdom when she was 15 years old. In 2009, Jackson was crowned Miss Teen World in America.

Aditi Arya is a beauty pageant winner, actress, model, and research analyst from India. She won Femina Miss India World 2015. She was born on September 18, 1993, and was raised in Chandigarh, Punjab. She got an opportunity to work with luxury brands. She has also joined the star-studded cast of Kabir Khan’s big project 83.