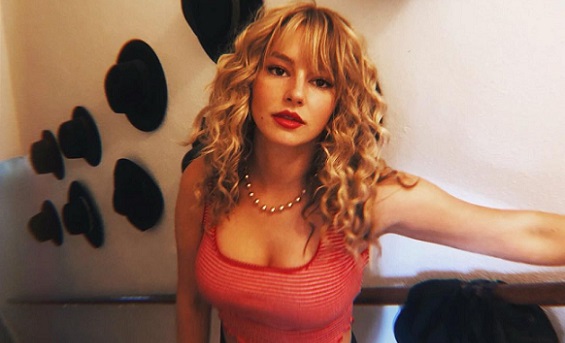 Hassie Harrison is an American actress known for her roles in Yellowstone, Tacoma FD and The Iron Orchard. Hailing from Dallas, Texas, she has three sisters and holds a degree in Archaeology. Hassie Harrison now lives in Los Angeles, California. She debut her acting career in 2014 with the TV Series “Hart of Dixie” and “L.A. Rangers”.

Hassie Harrison was born on March 20, 1990, in Dallas, Texas and She is 32 years old as of 2022. She has three sisters. Her younger sister, Bailey Harrison is a Fashion Designer.

Her Mother, Laurie Harrison, was a Visual artist, Painter, and Creative being and she harnessed Hassie’s creativity. At an early age, her mother was heavily involved with the children’s theater in Dallas, where Harrison found her love in acting.

Hassie’s Mother and Father are very supportive of her from her very Childhood. As her mother was involved with the children’s theater in Dallas, she used to take Hassie along to watch the plays. This helps Hassie to discover her love for Acting.

Hassie Harrison holds a degree in Archaeology and Business. At age 15, she studied European Cinema in Copenhagen, Denmark.

She later attended a drama school headed by acting coach Ivana Chubbuck, where she learned modern methods of film performance and creativity.

After completing her graduation she moved to Los Angels where she visited Strasberg Film & Theatre Institute. She also joined the Upright Citizens Brigade, an American improvisational theatre that teaches comedy skills.

Hassie Harrison hustles a bit in her initial days for getting roles. For her survival in LA, she did a few little part-time jobs like the receptionist in a SPA. She also worked with a Casting Director for Year and a half and that was a very learnable experience for her.

She focused initially on learning and improving her Acting Skills instead of jumping into Movies. Soon she found representation and got some Indie movies. In 2014 she got a role in the American comedy-drama television series, “Hart of Dixie”.

Hassie also had a guest appearance as “Jem” in her debut movie “Southbound” in 2015. Later she acted as “Shelby Lockhart” in the Mike Testin-directed film “Dementia” the same year. She then portrayed a lead role as Andie in the short comedy-themed movie “The First Time” in 2016.

For a few years, she did some movies and Television series with little roles. In 2019, Hassie got the biggest break after getting selected for the main role in the American comedy television series “Tacoma FD“.

Below is the full interview of Hassie Harrison.

Hassie Harrison is in a longtime relationship with her famous boyfriend “Austin Nichols”. They first met on the sets of the movie, “The Iron Orchard”. They made their relationship publicly official on the red carpet of Oceana’s 11th Annual SeaChange Summer Party in Laguna Beach, California on July 21, 2018.

Personal life Harrison is full of joy and she loves pets. She also loves to travel around beautiful places full of nature with her family. Besides traveling, Hassie has a big passion for sports. She loves to watch live matches of Football,  Horse Racing, and Baseball.

Harrison’s Networth is around $500,000 USD as of 2022. Her initial days in Los Angels were struggling as she was doing small jobs side by of Acting school for her living. The 32 years old actress is now getting a big project through which she is making a good income.

Some Interesting Facts about Hassie Harrison

Many of us are curious to know about our favorite Celebrity’s biography, height, age, family, affairs, and many more things. This article gives you a glimpse into information related to Hassie Harrison Height, Age, Networth, Boyfriend, Biography, and more. We hope you liked the provided information, and let us know if you did.