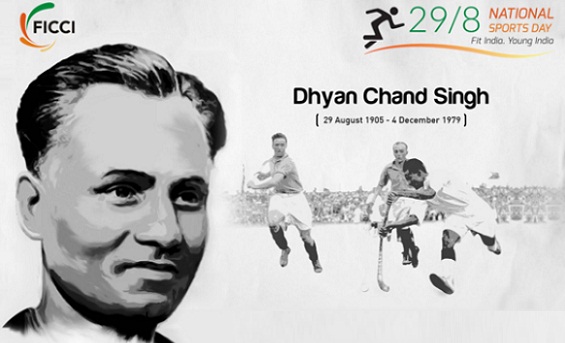 National Sports Day is particularly celebrated in academic institutions and sports academies all over India. It is celebrated all over India by organizing different types of sports like Marathons, Walkathons, Hockey, Football, Volleyball, etc. FICCI, in association All India Council for Physical Education and Fitness365, has been undertaking a nation­wide initiative to create mass awareness about the importance of Sports and Physical Activities in creating active communities, active schools and active families and build a Fit, Healthy and Youthful India. National Sports Day is celebrated in many Educational Institutes and Sports Academies. To boost sport spirit & the sports scenario in the country a lot of sports and events are conducted.

Some events are organized to appreciate many new sports player and give them awards & recognition. On this day, various matches are organized between Hockey Teams in the country. On this day, big sports awards like Arjun Award and Khel Ratna Awards are also distributed by India’s President to the sportsperson who have displayed extraordinary work during the year. Last year’s award ceremony was postponed to September 25 from the usual August 29, due to clash of dates with the Asian Games 2018 which was held in Jakarta, Indonesia.

The theme of National Sports Day 2019 is Fit India, Young India.  This theme describes the importance of Sports and Physical Activities in creating active communities, active schools, and active families and build a Fit, Healthy, and Youthful India. If you want to give a speech on National Sports Day or you need an essay on this topic then Click following link: National Sports Day Speech/Essay. You can also use the information shared by us.
If you Like this Article on “National Sports Day (India) 2019, Speech, Theme, History” then Please let us know in the comment section below.