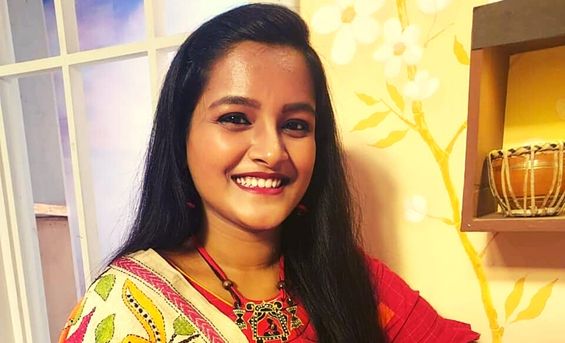 Sanchari Sengupta is an Indian Singer and live performer from Kolkata, West Bengal. Sanchari came to fame after she was selected as one of the contestants in the 13th season of the singing reality show, Indian Idol on Sony TV in 2022.

Sanchari Sengupta was born on 8 January 2001, in Kolkata and she is 21 years old as of 2022. Sanchari had a very supportive family and her mother follow along with her on her every singing audition and event.

Sanchari’s father’s name is Sudipta Sengupta and her mother’s name is Pushpita Sengupta. Her mother is also an artist and during her Indian Idol Audition, she wore a saree hand painted by her mother. She is the only child of her parents.

Sanchari Sengupta is active in singing from a very early age. Sanchari learned opera singing from the London School of Music, Kolkata. In 2011 at the age of 10 years, she became the winner of the singing reality show, “Sa Theke Sa Junior” on ETV.

In 2012 she won “National Bal Shree Honour” award, which is awarded to creative children in the age group of 9–16 years. In 2014 she won Pogo Amazing Kid Award 2014 : Singer category. In 2020 Sanchari became winner of Star Jalsha TV, Bengali singing reality show, “Super Singer“. She got a cash prize of 2.5 Lakh Rupee for winning Super Singer.

Sanchari also did playback singing along with Shovan Ganguly in Bengali Movie. The song is “Badhone Bandhibo” from the Bengali film “Baba, Baby, O”.

In 2022 Sanchri got selected for Indian reality show Indian Idol Season 13. During the audition she showcased her Opera singing skills which won the heart of Judges.

Sanchari is 5 feet 3 Inches Tall. She commonly wear Bengali Sari and promotes her culture and region.

Many of us are curious to know about our favorite Celebrity’s biography, height, age, family, affairs, and many more things. This article gives you a glimpse into information related to singer, Sanchari Sengupta, Indian Idol, Age, Parents, Family, Biography and More. We hope you liked the provided information, and let us know if you did.