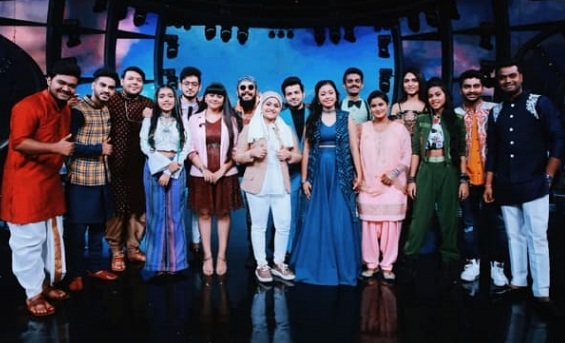 Sa Re Ga Ma Pa is an Indian Hindi-language singing reality show. In 1995, It was launched on Zee TV as Sa Re Ga Ma. It is India’s longest-running television show, through which artists show their talent by coming from every corner of the india.

Aditya Narayan hosted the show at the time, and the judges were Himesh Reshammiya, Vishal Dadlani, Shankar Mahadevan. This is one of the oldest TV reality shows, and it is very popular among Indians.

Today we discuss who will become saregamapa winner in 2021 and get the Gold Medal in Mega Audition and make it to the next round.

Sanjana is an Indian singer who came from Delhi and belongs to a middle-class family. Sanjana’s journey from Delhi to appearing on the Zee tv reality show was not an easy journey. She also has a small daughter. Sanjana is now one of the top 15 finalists of Sa Re Ga Ma 2021. Millions of people have been impressed by the magic of his voice.

Vraj Kshatriya is a well-known singer on Saregamapa final list. He belongs to Vadodara Gujarat and his father is a businessman. His new song with Sunny Karmakar is trending now.

Sachin Kumar Valmiki’s voice impressed the judges and the Indian audience. He is completely dedicated to his family. He is also a music teacher and belongs to Lakhimpur, UP.

Sharad’s melodious voice teases the attention of the SaReGaMaPa audience. Everyone is curious to know the reason behind Sharad Kumar’s excellent performance. He has made his place in millions of hearts because of his excellent voice.

Yumna Ajin is the next contestant on our list of top 10 SaReGaMaPa Contestants 2021. She was born on July 29, 2005, in Vengara, Malappuram, Kerala, India, and also appeared on several reality shows. She is one of the most loved contestants of the SaReGaMaPa show 2021.

Neelanjana Ray is a contestant on the Indian reality show SaReGaMaPa and she is from Alipur, West Bengal. She completed her primary education at Netaji Bedapit Higher Secondary School. She is giving all her time to a singing career, dropping her studies.

Ananya Chakraborty is a singer and famous social media personality because of her unique voice. She is a well-known Bengali singer, music producer, and songwriter who competed in Zee Tv’s singing reality show Sa Re Ga Ma Pa 2021.

Laj is a popular SaReGaMaPa contestant and social media influencer. His Instagram fan following is 22.6k, and she is the most popular singer among millions of people. His unique fashion and styling sense distinguishes her personality from others. She is 25 years old and belongs to Jalandhar Punjab.

Rajshree Bag is a well-known contestant of SaReGaMaPa tv reality show. Rajshree is a famous singer in the top 15 contestants of SaReGaMaPa 2021. She completed her studies from Hiranpul Balika Vidyalaya. Rajashri Bag 19 years old girl who belongs to West Bengal.

Dipayan Banerjee is another well-known singer of the SaReGaMaPa reality show 2021 and he belongs to Kolkata. He is a 21 years old guy who won millions of hearts.

Anshika Chaunkar’s family calls her Anshu at home. Saregamapa reality show 2021 has a big hand in making her a famous personality. She belongs to Mumbai, Maharashtra (Dombivli).

Farhan Sabir is 23 years old now, was born in Allahabad, and raised in New Delhi. Farhan got the biggest success in “The Voice India Season 2”. He not only learned a lot from this show but also won the show under the guidance of Shaan. He was eliminated from the Saregamapa Show 2021 in the early stage.

Aravind Nair is a 20 years old guy who was born in Kerala, India. He was also eliminated in the SaReGaMaPa Show 2021.

Kinjal is a well-known Kolkata-based singer. He is currently pursuing an academic career in Indian Vocal Music at Rabindra Bharati University in Calcutta. But for now, he is an eliminated candidate in the SaReGaMaPa 2021 show.