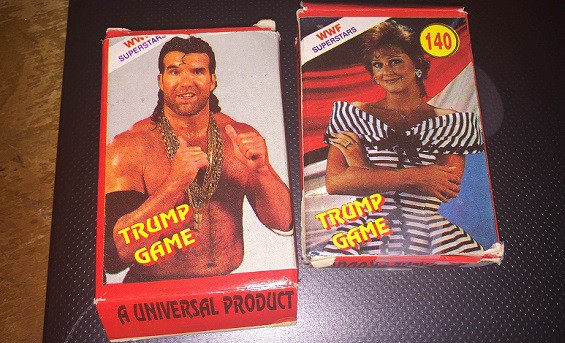 In the mid and late 90’s Cable TV, Internet, and Animated world didn’t yet gain popularity in India. Also during this time period, Video Game just entered the Indian Market and was getting popular. Most children have limited access to Cable TV and Video Games. I remember there were special shops to play Video games. One such shop in our street charge 1 Rupee for 10 minutes. Comics Books were also very popular during this period, especially characters like Nagraj, Dhruv, Doga, Chacha Chaudry, and Sabu. During 90’s period the Indoor games like Carom Board, Ludo, Chess, and Trump Game were easily accessible for children as these were cheap and available on every game store.

Trump Game was one of the Indoor games that were played by the 90’s Children. Trump game was a card game which came usually in two formats. One format was of Cricket players which contain the Records of different players. Cricket trump games came in different formats like Test Bowlers, Test Batsmen, ODI Batsmen, etc.

Another popular format of Trump game was WWF Trump Game. WWF Trump Game contains cards of Pro-Wrestlers of that time. These cards came in a set of 30, 50 or some times Trump Game came in set more than 100 Cards. Each card feature picture of a particular wrestler and his details like his Rank, Fights Fought, Fights Won, Height, Weight, Chest and Biceps. Mostly Bret Hart and Hulk Hogan have Rank 1 and Rank 2 in 1995 and 1996 Trump cards. Tennis Trump Cards format also came during 90’s but that was not so popular as that of Cricket and WWF cards.

Here are the rules of “WWF Trump Game Cards, Cricket Trump Game (1990’s Favourite)“for two or more players. The object is to win all the cards. The cards are dealt equally and each player holds his cards face up. The players to the left of the dealer start. Each card has a number of characteristics e.g. (rank, fight fought, won weight, etc.).

The winner places the card and the game continues till one player has all the cards and become the winner. If two or more players lay cards with the same winning value then the other players leave their cards on the table and the players with the equal winning value decide who wins the trick. The players who originally called, call again and the highest value wins all the cards on the table.

Some kids used different rules when there is a tie. They use the word “Clash” while saying their Cards Characteristic e.g. They Call Biceps 22 Clash! Each player was free to speak “Clash!” and the player who speaks the “Clash!” first will win the card in case of Tie.

With the rise of computers, the Internet, and Moblie Phones these Trump Games loss their popularity in India. Today in India, very rare people know about Trump Game and Trump Cards.

In 90’s these Trump Cards were printed and manufactured by local companies in Mumbai and other big cities. But nowadays there are rare local manufacturers of Trump Cards. Even some companies that manufacture Trump Cards, produce low-quality cards compared to 90’s. The WWE Topps Trumps do not contain Characteristics like Rank, Fights Fought, Fights Won, Height, Weight, Chest and Biceps. This one, on the other hand, has Toughness, Sportsmanship, Strength, etc, which is okay for someone who is seeing it for the first time, but not for the folks who have played the original WWF Trump games. Topps also produce WWE Slam Attax cards and Topps Cricket Attax Cards. WWE Slam Attax cards have Characteristics like Attack and Defence.

Note: I hope that you liked this Article about WWF Trump Game Cards, Cricket Trump Game (1990’s Favourite). I myself really miss these cards and wanted to collect them. You also share your review and experience if you ever played this game in your Childhood in the 1990’s.