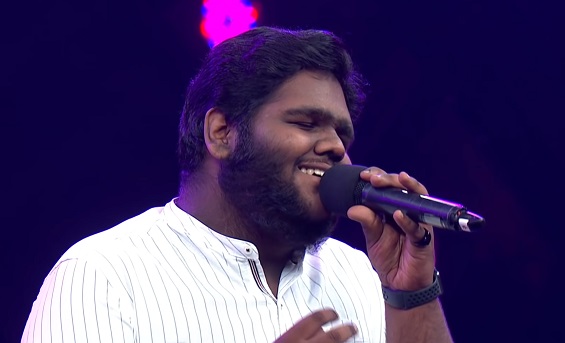 Vaishnav Girish is a Versatile Melodious Singer from Kodungallur, Kerela. Vaishnav born on 21st  June 2002. He is known for his achievements as a contestant of Indian Idol Junior 2015, Contestant of Sa Re Ga Ma Pa Lil champ 2017, and Indian Idol 2020.

Vaishnav comes from a middle-class family. He is very dear to his mother and father. His father is an officer of Canara Bank, a branch of Kaipamangalam. His elder brother, G Krishnanunni, works overseas.

He had won many awards for his singing. He won the CBSE State Kalaprathibha title for two consecutive years (2013 and 2014) and has won first prize for Light Music in State School Youth Festival 2017 held at Kannur, Kerala. Later he won the MLA Excellence Award which was presented to him by famous south actor, Mammootty.

At the age of 14, he gave audition for SaReGaMaPa Lil Champs 2017. His audition performance has gone viral on the internet where he is already star with more than 400,000 likes on his Facebook page. He sang ‘Bin Tere’ from ‘I Hate Love Stories’ for the audition process.

Bollywood superstar Shah Rukh Khan was amazed by the talent of the young musical wonder when he attended the show, during the promotions of his film Jab Harry Met Sejal.

He was a very strong contestant and reached the final of SaReGaMaPa Lil Champs. Unfortunately, he lost the final to Anjali Gaikwad.

In 2020 Vaishnav gave an audition for Indian Idol Season 12. He cleared both the audition round and theater round of Indian Idol and reached the top 15 contestants.

Given below are the social media profiles of Vaishnav Girish: