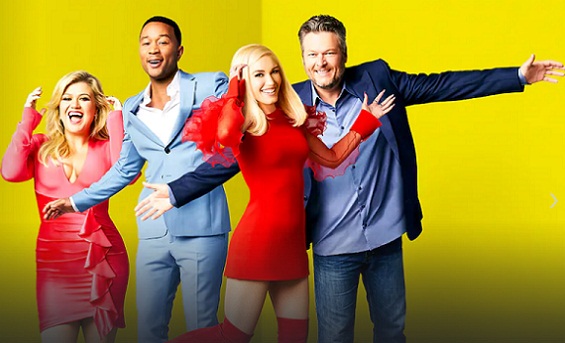 This article will put light on The Voice American Season 17, Coaches, Hosts and Contestants 2019. The Voice is an American singing competition television series broadcast on NBC. It premiered during the spring television cycle on April 26, 2011, and expanded into the fall cycle with the premiere of the third season on September 10, 2012.  It is based on the original The Voice of Holland. The aim of “The Voice” is to find currently unsigned singing talents contested by aspiring singers, age 13 or over, drawn from public auditions.

The seventeenth season of the American reality television show The Voice premiered on September 23, 2019, on NBC. John Legend, Kelly Clarkson, and Blake Shelton returning as coaches previous season. Gwen Stefani is a new coach, replacing Adam Levine who last coached in the previous season. Below are Pictures of Coaches of Season 17 of The Voice.

Carson Daly already hosted all 16 seasons of The Voice American and now he returned for his 17th season as host. Prior to 2002, Carson Daly was a VJ on MTV’s “Total Request Live“, and a DJ for the Southern California-based radio station 106.7 KROQ-FM. In 2002, Daly joined NBC, where he began hosting and producing the late-night talk show “Last Call with Carson Daly”, and occasionally hosting special event programming for NBC. In 2011 he hosted  The Voice American on NBC. Since then he regularly hosts this show.

Note: For the latest updates on “The Voice American Season 17, Coaches, Hosts and Contestants 2019” keep visiting our website. Also read about the winner of Season 16, Maelyn Jarmon.

Disclaimer: Images used in this article are not our property and are collected from the NBC official website and other Internet sources. If the owner of these Images feels any offense then please comment below this article or message on our Facebook Page, Fashion Chandigarh. We will immediately remove the picture from the Article.

1 thought on “The Voice American Season 17, Coaches, Hosts and Contestants 2019”